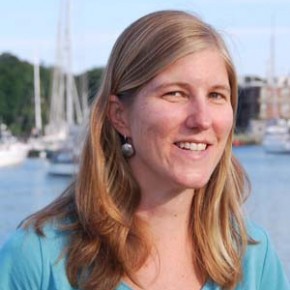 Kelly Sutherland studies ecology and hydromechanical function in gelatinous zooplankton.  These organisms play an important role in structuring planktonic communities and are increasing in number and frequency in some locations due to anthropogenic impacts (Purcell 2012). (1) An example project would allow students to investigate the mechanics of ctenophore propulsion using a comparative approach.  How does metachronal  beating in ctene rows control fluid shedding and thrust production?  Considering that ctenes interact with the surrounding fluid at intermediate Reynolds numbers, force production is likely sensitive to modifications in size, ctene morphology and beat frequency. This sets up a rich system for testing hypotheses about functional morphology as it relates to animal-fluid interactions, and specifically thrust production.  Cilia-fluid interactions will have broad relevance to other biological systems. (2) Another example project would involve investigating predator-prey interactions between jellyfish and their prey using viedography.  Jellyfish are highly selective feeders but we don’t necessarily understand the mechanisms underlying this selectivity.  (3) Finally, students could potentially sample vertical and horizontal variability of gelatinous species and their prey off the Oregon coast via a research boat.  Depending on the project, students will be able to do field sampling with plankton nets, current meters, CTDs and cameras as well as laboratory flow visualizations using Particle Image Velocimetry and high-speed, high-resolution videography.