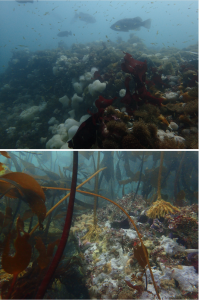 Photos of the rocky subtidal zone offshore of Cape Arago by Aaron Galloway.

This is an open-access resource being created by OIMB’s Deep-Sea Biology course and other students and researchers. It is being compiled and edited by Caitlin Q. Plowman, Matt N. DePoalis and Craig M. Young.

To submit corrections, questions or a request to become editor of a species profile please email cplowman@uoregon.edu.

Just a few years after the first National Estuary was established in Oregon’s South Slough, Jerry and Lynn Rudy published Oregon Estuarine Invertebrates, an illustrated guide to assist students and researchers in identifying the key attributes of invertebrates commonly found in the embayments of Oregon, Washington and Northern California.  Lavishly illustrated by beautiful pen-and-ink diagrams by Lynn Rudy, the volume has served generations of students at the Oregon Institute of Marine Biology and elsewhere and has recently been updated, expanded and uploaded for open access under the guidance of Alan Shanks, Barbara Butler and Terra Hiebert, with the assistance of several OIMB students.

Oregon Estuarine Invertebrates added to a long tradition of regional field guides on the West Coast of North America, serving targeted audiences ranging from casual tidepoolers to professional researchers.  California has an especially distinguished tradition of such works beginning with Common Sea Shells of California by Josiah Keep (1881) and including, Seashore Animals of the Pacific Coast by Myrtle Johnson and Harry Snook (1927), Between Pacific Tides by Ed Ricketts and Jack Calvin (1939), Natural History of Marine Animals by G.E. MacGinitie and Netty MacGinitie (1949), Introduction to Seashore Life of the San Francisco Bay Region and the Coast of Northern California by Joel Hedgpeth (1962), and the richly illustrated Intertidal Invertebrates of California by Morris, Haderlie and Abbott (1980).

While teaching zoology at Berkeley, S.F. Light famously achieved the most complete taxonomic treatment to date of the intertidal invertebrates with his 1941 Laboratory and Field Text in Invertebrate Zoology that has subsequently been revised and updated through several editions by James Carlton (formerly on the faculty at OIMB), with contributions by authorities on the various taxa.  Light’s manual has emerged through the decades as the authoritative source for California intertidal invertebrates.

The first guide focused on the Pacific Northwest was Animals of the Seashore by Muriel Guberlet (1936), and her work was followed by Seashore life of Puget Sound, the Strait of Georgia, and the San Juan Archipelago by Eugene Kozloff (1973).  Kozloff (1974) also compiled the useful Keys to the marine invertebrates of Puget Sound, the San Juan Archipelago and Adjacent region, which covers both intertidal and subtidal animals.  Spectacularly illustrated photographic guides useful especially at the depths frequented by divers include Marine Life of the Pacific Northwest by Lamb and Hanby (2005) and Beneath Pacific Tides: Subtidal Invertebrates of the West Coast by Jensen, Gotshall and Flores Miller (2018).

Marine taxonomy has been transformed by the digital age.  All students, researchers and amateur naturalists now have immediate access through any computer to comprehensive and up-to-date global species lists, synonymies, and references to the original species descriptions. Much of the older literature has been digitized and uploaded, making it accessible from offices and home computers worldwide.  No longer does species identification require pilgrimages to large museums or ancient marine labs.  Notable websites with open access include WORMS (World Register of Marine Species), OBIS (Ocean Biodiversity Information System), the Tree of Life Web Project, and an ever-increasing assortment of richly illustrated websites devoted to specific phyla or regions.

Oregon Shelf Invertebrates was inspired by Oregon Estuarine Invertebrates and is intended to fill a similar need, as work in Oregon has expanded from the estuaries and rocky shores into the Oregon Territorial Sea (to the 3-mile limit) and beyond.  Work in the Oregon subtidal zones has always been challenging because of adverse conditions for divers and uncomfortable working conditions on an often stormy coastline.  A few years ago, I surveyed the literature on subtidal ecology done with SCUBA in southern Oregon.  In stark contrast to the myriad diving studies done in more benign conditions such as Monterey Bay, the Channel Islands, the San Juan Islands and Barkley Sound (all places with established marine laboratories), I was able to find only a handful of published studies done by divers on the open Oregon Coast.  Likewise, most of the work on the shelf consisted of fisheries surveys by trawl, with just a few submersible dives, also focused on fish surveys. More recently, ROV work was stimulated by a desire for environmental protection in marine reserves and elsewhere, but there remains no comprehensive treatment of the species on the Oregon Shelf.  The prospect of offshore wave and wind energy has recently stimulated additional interest.

This on-line book is intended to grow over the indefinite future as generations of undergraduate and graduate students have opportunities to explore the Oregon shelf.  Contributions will come primarily from students in OIMB classes such as “Deep-sea Ecology” and “Invertebrate Biology” with editorial assistance and fact-checking by faculty and PhD students. Student authors will be acknowledged in their respective chapters.  We expect that the user base will include not only marine biology students, but also fisheries managers, federal and state agencies, conservationists, fishermen, and scientists assessing the impacts of offshore development as well as interested members of the public.  We hope that as this Oregon-based guide grows, it will encourage greater attention to the highly diverse invertebrates of Oregon offshore waters while expanding our understanding of their lifestyles, distributions and biology.