by mwolf1 on April 8, 2021 in Employment Opportunities, Happenings at OIMB

To apply complete the online application here. Position Description: The University of Oregon’s marine lab, the Oregon Institute of Marine Biology is interested in applicants to teach an eight-week Biology of Fishes course for summer 2021. Applications will be accepted on a continuous basis and pool will remain active through October 31, 2021. Screening of applications […]

by mwolf1 on January 21, 2021 in Employment Opportunities, Happenings at OIMB

To apply: complete the online application here Position Description: The purpose of this position is to provide support for the academic mission (teaching and research) of OIMB. Primary responsibilities include the safe operation of a 50 ft. research vessel (the RV Pluteus) and smaller boats in coastal waters, including the maintenance, repair, and safety of […]

by Caitlin Plowman on May 4, 2017 in Employment Opportunities, Happenings at OIMB

Position Summary The University of Oregon’s Institute of Marine Biology (OIMB) invites applications for a part-time (.50 FTE) seasonal Cook 1. This position generally works full-time during spring and summer terms. There may be occasional work during fall and winter terms. As part of the evaluation process for this position, a practical test will be […]

by Caitlin Plowman on February 8, 2016 in Employment Opportunities, Happenings at OIMB

by Caitlin Plowman on July 17, 2015 in Happenings at OIMB

A team of OIMB scientists is currently on an oceanographic expedition in the Atlantic Ocean.  Working in collaboration with Duke University and North Carolina State University, the scientists from U.O. are exploring cold seeps in the western Atlantic Ocean from July 8 – 18.  During the first half of the cruise they successfully tested newly developed sampling […]

by Caitlin Plowman on June 10, 2015 in Happenings at OIMB, Marine Life Updates

The Invertebrate Zoology course this term (taught by Richard Emlet and Maya Watts) found some very interesting organisms that have only rarely, if ever, been seen in Oregon before! Bay Nature wrote this article about the Hopkins’ rose nudibranch (Okenia rosacea), a California native, which the class found at Sunset Bay.              […]

Click on the image below to link to the full article.   FEATURES | CAScade: University of Oregon College of Arts and Sciences cascade.uoregon.edu 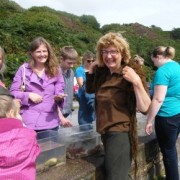 Cynthia Trowbridge, 6 American students, and her British and Irish colleagues are in their final week of collaborative research at Europe’s first marine reserve at Lough Hyne, Co. Cork, Ireland. The group participated in the annual Heritage Week “touch tank” event as well as many other cultural or historical events. Follow the group’s activities through […]

OIMB students and faculty are currently participating in deep-sea research on the Research Vessel Atlantis in the Gulf of Mexico. Using the deep submergence vehicle Alvin and the autonomous underwater vehicle Sentry, they are exploring cold methane seeps in the Gulf of Mexico at depths as great as 3500m (about two miles down). The first […]

In summer term of 2014, University of Oregon students will have a unique opportunity to study marine ecology in Panama under the direction of Professor Richard Emlet. For more information: Panama 2014 course Brochure